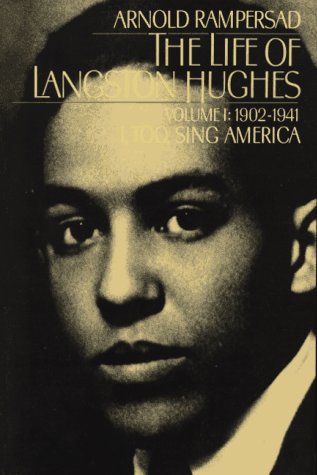 Paperback Description:
Poet, playwright, novelist, and a grand figure in the Harlem Renaissance of the 1920s, Langston Hughes stands as one of the most extraordinary and prolific American writers of this century. As the first installment of a two-volume biography, this portrait of Langston Hughes depicts his life from his birth in Missouri in 1902 to the winter of 1941.
Rampersad recounts Hughes’ early days in Kansas as a child of a family steeped in radical Abolitionism, with an ancestor who fought and died at Harper’s Ferry in John Brown’s band. Taught by his aged grandmother to revere freedom and justice, he nevertheless led a lonely life as a child. His mother left him in his grandmother’s care while trying unsuccessfully to launch a career in the theater, and his father—a black man who seemed to hate blacks—abandoned him to find a business career in Mexico. Hughes grew into a highly disciplined and yet restless adult who found personal salvation in poetry.
Inspired by both the democratic chants of Walt Whitman and the vibrant forms of Afro-American culture, Hughes became the most original and revered of black poets. Rampersad’s study traces the nomadic, yet dedicated spirit that led him—as a young man—to Mexico, Cuba, Haiti, Africa, Europe, the Soviet Union, China, and Japan, as well as all over the United States. During his travels, Hughes cultivated associations with a dazzling range of political activists, patrons, and fellow artists, including Paul Robeson, Zora Neale Hurston, Carl Van Vechten, Lincoln Steffens, Nancy Cunard, Ernest Hemingway, and Claude McKay.
Based on exhaustive research in archival collections throughout the country, especially in the Langston Hughes papers at Yale University’s Beinecke Library, Rampersad’s masterful work presents a vivid portrait of one of our greatest writers and a sweeping panorama of culture and history in the early twentieth century.

Books similiar to The Life of Langston Hughes: Volume I: 1902-1941: I, Too, Sing America may be found in the categories below: