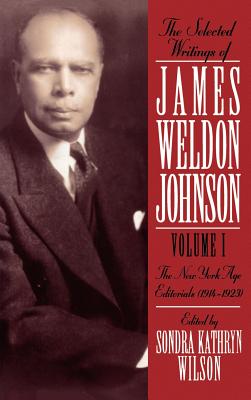 Hardcover Description:
James Weldon Johnson (1871-1938) would have been judged a successful man had he merely remained the principal of Stanton School in his hometown of Jacksonville, FL. Destiny led him, however, to become the first African-American to pass the Florida Bar exam, to win international acclaim as a songwriter, poet, novelist, diplomat, playwright, journalist, and champion of human rights. Since that time, though, his life and contributions have gone virtually unnoticed, except for his well-known song, "Lift Every Voice and Sing."

Johnson’s dual role as civil rights leader and literary artist was unprecedented and has not been replicated since. He used this duality in attempt to exonerate black Americans from the psychological and physical persecutions of "Jim Crow." These two volumes comprise of Johnson’s literary work, song lyrics, and both his literary and political essays. A critical introduction places Johnson in relation to other black artists, the development of African-American literature, and early integrationist movements.

By painting a vivid picture of the race problem in this nation, and by his portrayal of the successes and possibilities of his race, he pricked white America’s conscience. This collection serves as witness to Johnson’s pioneering a momentous standard for African-American literature while he laid the groundwork for the early civil rights movement in America.

More books like The Selected Writings of James Weldon Johnson: Volume I: New York Age Editorials (1914-1923) may be found by selecting the categories below: