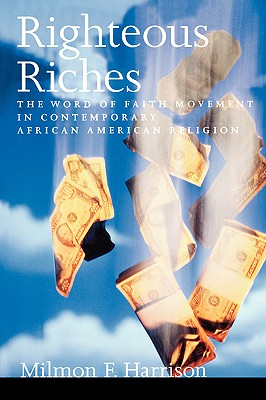 Read Our Review of Righteous Riches: The Word of Faith Movement in Contemporary African American Religion

Paperback Description:
Does God want us to be wealthy? Many people believe that God offers not only eternal joy in the hereafter but also material blessings in the here and now. Other Christians see this "prosperity theology," as nothing more than vulgar materialism, incompatible with orthodox Christianity. In Righteous Riches, Milmon F. Harrison examines the Word of Faith movement, an independent, non-denominational Christian movement that preaches the so-called "health and wealth gospel."
The Word of Faith movement is an international network loosely bound by a basic doctrine called the "Faith Message," which teaches that it is God’s will for Christians to be prosperous, successful, and healthy in the present life. Drawing on his personal experiences as a former insider and in-depth interviews with members, Harrison takes us inside the movement, revealing what it is like to belong, and how people accept, reject, and reshape Word of Faith doctrines to fit their own lives. Although the movement is not exclusively African American, many of its most prominent and recognized leaders are African American ministers with large congregations and national television audiences. Analyzing the movement’s appeal to African Americans, Harrison argues that, because of their history of oppression and discrimination, African American religious institutions have always had to address the material—as well as spiritual—concerns of their members. The Word of Faith Movement, he says, is one of several prosperity movements that resonate strongly with African Americans. Situating the movement in the contexts of both contemporary American religion and the history of the Black Church, Righteous Riches offers a fascinating look at a quintessentially American phenomenon.

More books like Righteous Riches: The Word of Faith Movement in Contemporary African American Religion may be found by selecting the categories below: