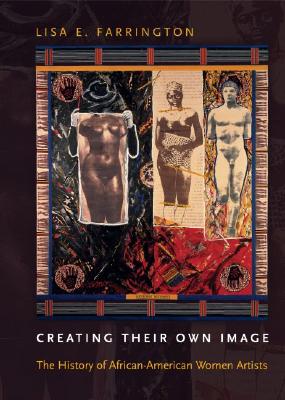 Creating Their Own Image: The History of African-American Women Artists
by Lisa E. Farrington

Hardcover Description:
Creating Their Own Image marks the first comprehensive history of African-American women artists, from slavery to the present day. Using an analysis of stereotypes of Africans and African-Americans in western art and culture as a springboard, Lisa E. Farrington here richly details hundreds of important works—many of which deliberately challenge these same identity myths, of the carnal Jezebel, the asexual Mammy, the imperious Matriarch—in crafting a portrait of artistic creativity unprecedented in its scope and ambition. In these lavishly illustrated pages, some of which feature images never before published, we learn of the efforts of Elizabeth Keckley, fashion designer to Mary Todd Lincoln; the acclaimed sculptor Edmonia Lewis, internationally renowned for her neoclassical works in marble; and the artist Nancy Elizabeth Prophet and her innovative teaching techniques. We meet Laura Wheeler Waring who portrayed women of color as members of a socially elite class in stark contrast to the prevalent images of compliant maids, impoverished malcontents, and exotics "others" that proliferated in the inter-war period. We read of the painter Barbara Jones-Hogu’s collaboration on the famed Wall of Respect, even as we view a rare photograph of Hogu in the process of painting the mural. Farrington expertly guides us through the fertile period of the Harlem Renaissance and the "New Negro Movement," which produced an entirely new crop of artists who consciously imbued their work with a social and political agenda, and through the tumultuous, explosive years of the civil rights movement. Drawing on revealing interviews with numerous contemporary artists, such as Betye Saar, Faith Ringgold, Nanette Carter, Camille Billops, Xenobia Bailey, and many others, the second half of Creating Their Own Image probes more recent stylistic developments, such as abstraction, conceptualism, and post-modernism, never losing sight of the struggles and challenges that have consistently influenced this body of work. Weaving together an expansive collection of artists, styles, and periods, Farrington argues that for centuries African-American women artists have created an alternative vision of how women of color can, are, and might be represented in American culture. From utilitarian objects such as quilts and baskets to a wide array of fine arts, Creating Their Own Image serves up compelling evidence of the fundamental human need to convey one’s life, one’s emotions, one’s experiences, on a canvas of one’s own making.

Books similiar to Creating Their Own Image: The History of African-American Women Artists may be found in the categories below: