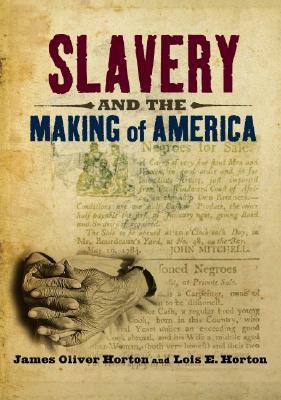 Slavery and the Making of America
by James Oliver Horton and Lois E. Horton

Hardcover Description:
The history of slavery is central to understanding the history of the United States. Slavery and the Making of America offers a richly illustrated, vividly written history that illuminates the human side of this inhumane institution, presenting it largely through stories of the slaves themselves.

Readers will discover a wide ranging and sharply nuanced look at American slavery, from the first Africans brought to British colonies in the early seventeenth century to the end of Reconstruction. The authors document the horrors of slavery, particularly in the deep South, and describe the slaves’ valiant struggles to free themselves from bondage. There are dramatic tales of escape by slaves such as William and Ellen Craft and Dred Scott’s doomed attempt to win his freedom through the Supreme Court. We see how slavery engendered violence in our nation, from bloody confrontations that broke out in American cities over fugitive slaves, to the cataclysm of the Civil War. The book is also filled with stories of remarkable African Americans like Sergeant William H. Carney, who won the Congressional Medal of Honor for his bravery at the crucial assault on Fort Wagner during the Civil War, and Benjamin "Pap" Singleton, a former slave who led freed African Americans to a new life on the American frontier. Filled with absorbing and inspirational accounts highlighted by more than one hundred pictures and illustrations, Slavery and the Making of America is a gripping account of the struggles of African Americans against the iniquity of slavery.

More books like Slavery and the Making of America may be found by selecting the categories below: