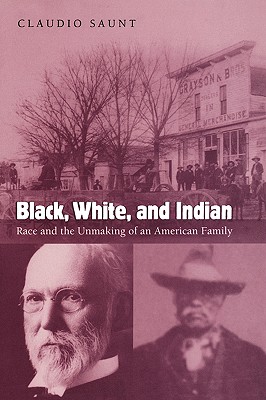 Black, White, and Indian: Race and the Unmaking of an American Family
by Claudio Saunt

Deceit, compromise, and betrayal were the painful costs of becoming American for many families. For people of Indian, African, and European descent living in the newly formed United States, the most personal and emotional choices—to honor a friendship or pursue an intimate relationship—were often necessarily guided by the harsh economic realities imposed by the country’s racial hierarchy. Few families in American history embody this struggle to survive the pervasive onslaught of racism more than the Graysons.

Like many other residents of the eighteenth-century Native American South, where Black-Indian relations bore little social stigma, Katy Grayson and her brother William—both Creek Indians—had children with partners of African descent. As the plantation economy began to spread across their native land soon after the birth of the American republic, however, Katy abandoned her black partner and children to marry a Scottish-Creek man. She herself became a slaveholder, embracing slavery as a public display of her elevated place in America’s racial hierarchy. William, by contrast, refused to leave his black wife and their several children and even legally emancipated them.

Traveling separate paths, the Graysons survived the invasion of the Creek Nation by U.S. troops in 1813 and again in 1836 and endured the Trail of Tears, only to confront each other on the battlefield during the Civil War. Afterwards, they refused to recognize each other’s existence. In 1907, when Creek Indians became U.S. citizens, Oklahoma gave force of law to the family schism by defining some Graysons as white, others as black. Tracking a full five generations of the Grayson family and basing his account in part on unprecedented access to the forty-four volume diary of G. W. Grayson, the one-time principal chief of the Creek Nation, Claudio Saunt tells not only of America’s past, but of its present, shedding light on one of the most contentious issues in Indian politics, the role of "blood" in the construction of identity.

Overwhelmed by the racial hierarchy in the United States and compelled to adopt the very ideology that oppressed them, the Graysons denied their kin, enslaved their relatives, married their masters, and went to war against each other. Claudio Saunt gives us not only a remarkable saga in its own right but one that illustrates the centrality of race in the American experience.

More books like Black, White, and Indian: Race and the Unmaking of an American Family may be found by selecting the categories below: