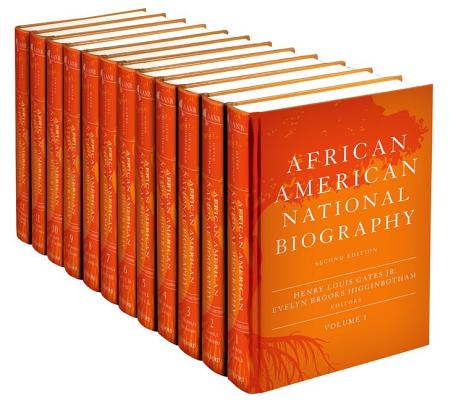 Hardcover Description:
The African American National Biography presents history through a mosaic of the lives of thousands of individuals, illuminating the abiding influence of persons of African descent on the life of this nation from the arrival of Esteban in Spanish Florida in 1529 through to notable black citizens of the present day. The original eight-volume set has now been expanded to twelve handsome volumes in its second edition, bringing the total number of lives profiled to nearly 5,000. The AANB continues to grow along with the field of African American biographical research, providing for continuous updates to the online edition, each entry written and signed by distinguished scholars. This is a remarkable achievement, a tenfold increase over the number of biographies contained in 2004’s award-winning and substantial African American Lives, and featuring such notable new entries as Cory Booker, C. Vivian Stringer, and Michelle Obama. In addition to Frederick Douglass, Booker T. Washington, W. E. B. Du Bois and Martin Luther King Jr., the AANB includes a wide range of African Americans from all time periods and all walks of life. Lives profiled include those already recognized as giants of black history, figures whose stories have never been told and that readers will be discovering for the first time, and living people who are shaping the era in which we now live. The names within are both famous and nearly-forgotten. In the words of AANB editor Henry Louis Gates, Jr., These stories, long buried in the dusty archives of history, will never be lost again. And that is what scholarship in the field of African American Studies should be all about.

Books similiar to African American National Biography (Revised) may be found in the categories below: