Running For Their Lives: The Extraordinary Story of Britain’s Greatest Ever Distance Runners by Mark Whitaker 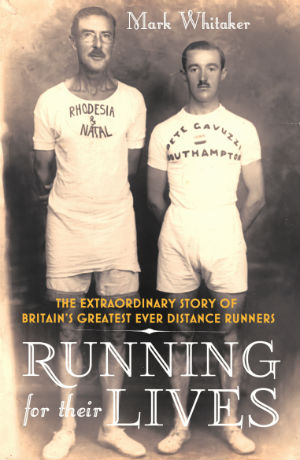 Running For Their Lives: The Extraordinary Story of Britain’s Greatest Ever Distance Runners
by Mark Whitaker

Book Description:
In 1928 two extraordinary Englishmen competed in an unprecedented and fearsome event - a transcontinental road race across America that required them to run an average of 40 miles for 80 consecutive days. They were to become the most famous long-distance runners in the world: yet history has forgotten them. Peter Gavuzzi was a young working-class ship’s steward, while Arthur Newton was a middle-aged intellectual who had taken up running to make a political point. Though separated by class, education and age, they became close friends and formed a successful business partnership as endurance athletes. They raced in 500-mile relays, in 24-hour events, in snowshoes and against horses; and they became the stars of a craze for endurance events that swept across depression-era North America. But as professional runners they were eschewed by the amateur running elite. Set against a turbulent backdrop of 1920s South Africa, 1930s Canada, war-torn France and 1950s Britain, "Running for Their Lives" is a story peopled with remarkable characters, unimaginable feats and tragic twists of fate. More importantly it is a homage to two inspirational and eccentric men who only now receive the recognition they so richly deserve.

More books like Running For Their Lives: The Extraordinary Story of Britain’s Greatest Ever Distance Runners may be found by selecting the categories below: