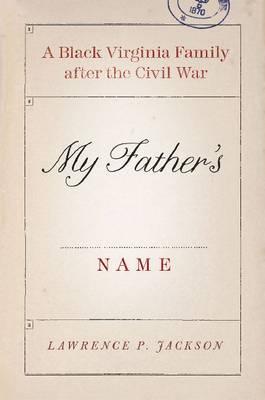 My Father’s Name: A Black Virginia Family After the Civil War
by Lawrence P. Jackson

Armed with only early boyhood memories, Lawrence P. Jackson begins his quest by setting out from his home in Baltimore for Pittsylvania County, Virginia, to try to find his late grandfather’s old home by the railroad tracks in Blairs. My Father’s Name tells the tale of the ensuing journey, at once a detective story and a moving historical memoir, uncovering the mixture of anguish and fulfillment that accompanies a venture into the ancestral past, specifically one tied to the history of slavery.After asking around in Pittsylvania County and carefully putting the pieces together, Jackson finds himself in the house of distant relations. In the pages that follow, he becomes increasingly absorbed by the search for his ancestors and increasingly aware of how few generations an African American needs to map back in order to arrive at slavery, "a door of no return." Ultimately, Jackson’s dogged research in libraries, census records, and courthouse registries enables him to trace his family to his grandfather’s grandfather, a man who was born or sold into slavery but who, when Federal troops abandoned the South in 1877, was able to buy forty acres of land. In this intimate study of a black Virginia family and neighborhood, Jackson vividly reconstructs moments in the lives of his father’s grandfather, Edward Jackson, and great-grandfather, Granville Hundley, and gives life to revealing narratives of Pittsylvania County, recalling both the horror of slavery and the later struggles of postbellum freedom.
My Father’s Name is a family story full of twists and turns—and one of haunting familiarity to many Americans, who may question whether the promises of emancipation have ever truly been fulfilled. It is also a resolute look at the duties that come with reclaiming and honoring Americans who survived slavery and a thoughtful meditation on its painful and enduring history.

More books like My Father’s Name: A Black Virginia Family After the Civil War may be found by selecting the categories below: