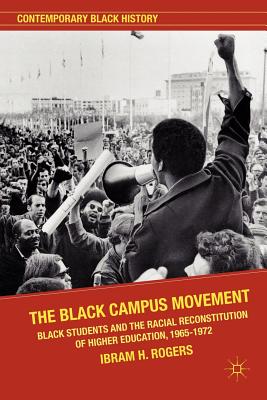 Between 1965 and 1972, African American students at upwards of a thousand historically black and white American colleges and universities organized, demanded, and protested for Black Studies, progressive Black universities, new faces, new ideas--in short, a truly diverse system of higher education relevant to the Black community. Taking inspiration from the Black Power Movement, Black students drew support from many quarters--including White, Latino, Chicano, Asian American, and Native American students--and disrupted and challenged institutions in nearly every state. By the end, black students had thoroughly reshaped the face of the academy. The Black Campus Movement provides the first national study of this remarkable and inspiring struggle, illuminating the complex context for one of the most transformative educational movements in American history, and providing a groundbreaking prehistory of black student activism from abolition through the 1960s. The book synthesizes records from more than three hundred colleges and universities, including documents from 163 college archives, into one national story. This authoritative study is essential to understanding modern American higher education.

Epilogue: Backlash and Forward Lashes of the Black Campus Movement

More books like The Black Campus Movement: Black Students and the Racial Reconstitution of Higher Education, 1965-1972 may be found by selecting the categories below:

Tell us what do you think about The Black Campus Movement: Black Students and the Racial Reconstitution of Higher Education, 1965-1972.