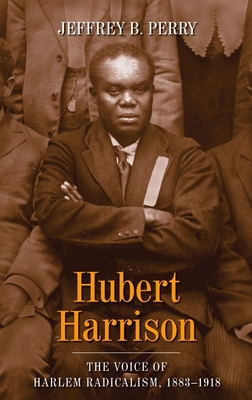 Hubert Harrison The Voice of Harlem Radicalism, 1883-1918
by Jeffrey B. Perry

Paperback Description:
Hubert Harrison was an immensely skilled writer, orator, educator, critic, and political activist who, more than any other political leader of his era, combined class consciousness and anti-white-supremacist race consciousness into a coherent political radicalism. Harrison’s ideas profoundly influenced "New Negro" militants, including A. Philip Randolph and Marcus Garvey, and his synthesis of class and race issues is a key unifying link between the two great trends of the Black Liberation Movement: the labor- and civil-rights-based work of Martin Luther King Jr. and the race and nationalist platform associated with Malcolm X. The foremost Black organizer, agitator, and theoretician of the Socialist Party of New York, Harrison was also the founder of the "New Negro" movement, the editor of Negro World, and the principal radical influence on the Garvey movement. He was a highly praised journalist and critic (reportedly the first regular Black book reviewer), a freethinker and early proponent of birth control, a supporter of Black writers and artists, a leading public intellectual, and a bibliophile who helped transform the 135th Street Public Library into an international center for research in Black culture. His biography offers profound insights on race, class, religion, immigration, war, democracy, and social change in America.

More books like Hubert Harrison The Voice of Harlem Radicalism, 1883-1918 may be found by selecting the categories below: