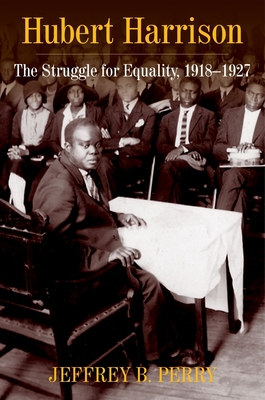 Hubert Harrison The Struggle for Equality, 1918-1927
by Jeffrey B. Perry

The St. Croix–born, Harlem-based Hubert Harrison (1883–1927) was a brilliant writer, orator, educator, critic, and activist who combined class consciousness and anti-white-supremacist race consciousness into a potent political radicalism. Harrison’s ideas profoundly influenced “New Negro” militants, including A. Philip Randolph and Marcus Garvey, and his work is a key link in the two great strands of the Civil Rights/Black Liberation struggle: the labor- and civil-rights movement associated with Randolph and Martin Luther King Jr. and the race and nationalist movement associated with Garvey and Malcolm X.

In this second volume of his acclaimed biography, Jeffrey B. Perry traces the final decade of Harrison’s life, from 1918 to 1927. Perry details Harrison’s literary and political activities, foregrounding his efforts against white supremacy and for racial consciousness and unity in struggles for equality and radical social change. The book explores Harrison’s role in the militant New Negro Movement and the International Colored Unity League, as well as his prolific work as a writer, educator, and editor of the New Negro and the Negro World. Perry examines Harrison’s interactions with major figures such as Garvey, Randolph, J. A. Rogers, Arthur Schomburg, and other prominent individuals and organizations as he agitated, educated, and organized for democracy and equality from a race-conscious, radical internationalist perspective. This magisterial biography demonstrates how Harrison’s life and work continue to offer profound insights on race, class, religion, immigration, war, democracy, and social change in America.

Books similiar to Hubert Harrison The Struggle for Equality, 1918-1927 may be found in the categories below: