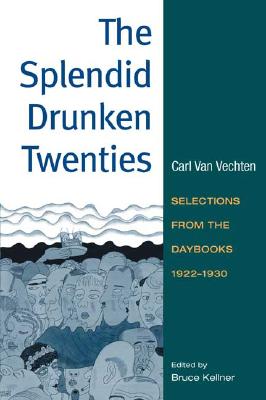 The Splendid Drunken Twenties: Selections from the Daybooks, 1922-1930
by Carl Van Vechten

Book Description:
This generous, representative sampling from the daybooks of Carl Van Vechten, one of the most significant figures of the Harlem Renaissance, is a rich resource and major reference tool for reconstructing the culture of 1920s New York, the social milieu during Prohibition, and more. Bruce Kellner has provided copious, informative notes identifying central figures and clarifying details. Between 1922 and 1930, Van Vechten kept a daily record of his activities. Not exactly diaries, but more than appointment books, the daybooks record his daily comings and goings, as well as the alliances, drinking habits, feuds, and affairs of a wide number of luminaries of the period. They catalog tales of bootlegging, literary teas, shifting cliques of artists and writers, cabaret slumming, sexual and social peccadilloes, and a seemingly endless sequence of parties.

More books like The Splendid Drunken Twenties: Selections from the Daybooks, 1922-1930 may be found by selecting the categories below:

Tell us what do you think about The Splendid Drunken Twenties: Selections from the Daybooks, 1922-1930.