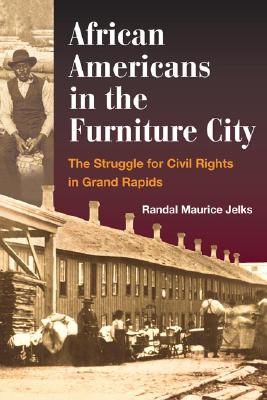 African Americans in the Furniture City: The Struggle for Civil Rights in Grand Rapids
by Randal Maurice Jelks

African Americans in the Furniture City is unique not only in terms of its subject, but also for its framing of the African American struggle for survival, civil rights, and community inside a discussion of the larger white community. Examining the African-American community of Grand Rapids, Michigan between 1850 and 1954, Randal Maurice Jelks uncovers the ways in which its members faced urbanization, responded to structural racism, developed in terms of occupations, and shaped their communal identities.

Focusing on the intersection of African Americans’ nineteenth-century cultural values and the changing social and political conditions in the first half of the twentieth century, Jelks pays particularly close attention to the religious community’s influence during their struggle toward a respectable social identity and fair treatment under the law. He explores how these competing values defined the community’s politics as it struggled to expand its freedoms and change its status as a subjugated racial minority.

More books like African Americans in the Furniture City: The Struggle for Civil Rights in Grand Rapids may be found by selecting the categories below: