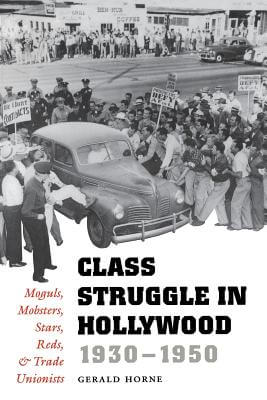 Book Description:
As World War II wound down in 1945 and the cold war heated up, the skilled trades that made up the Conference of Studio Unions (CSU) began a tumultuous strike at the major Hollywood studios. This turmoil escalated further when the studios retaliated by locking out CSU in 1946. This labor unrest unleashed a fury of Red-baiting that allowed studio moguls to crush the union and seize control of the production process, with far-reaching consequences.This engrossing book probes the motives and actions of all the players to reveal the full story of the CSU strike and the resulting lockout of 1946. Gerald Horne draws extensively on primary materials and oral histories to document how limited a "threat" the Communist party actually posed in Hollywood, even as studio moguls successfully used the Red scare to undermine union clout, prevent film stars from supporting labor, and prove the moguls’ own patriotism.Horne also discloses that, unnoticed amid the turmoil, organized crime entrenched itself in management and labor, gaining considerable control over both the "product" and the profits of Hollywood. This research demonstrates that the CSU strike and lockout were a pivotal moment in Hollywood history, with consequences for everything from production values, to the kinds of stories told in films, to permanent shifts in the centers of power.

More books like Class Struggle in Hollywood, 1930-1950: Moguls, Mobsters, Stars, Reds, and Trade Unionists may be found by selecting the categories below: