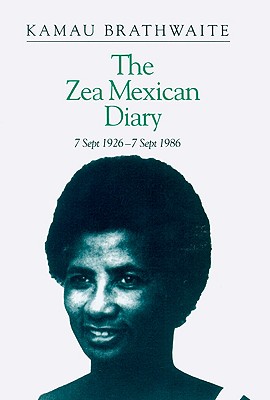 Book Description:
In May of 1986 Edward Kamau Brathwaite learned that his wife, Doris, was dying of cancer and had only a short time to live. Responding as a poet, he began “helplessly & spasmodically” to record her passage in a diary. Zea Mexican is a collection of excerpts from this diary and other notes from this period of the Brathwaites’ lives, and few who read this book will fail to be caught up in the depth of Edward Brathwaite’s grief.
Zea Mexican is a tribute to Doris Brathwaite and an exploration of the creative potency of love. (The title comes from the name Brathwaite gave Doris, who was originally from Guyana of part Amerindian descent.) Exposing the intimacy of his marriage, this book is the closest Brathwaite has ever come to an autobiographical statement. In examining his life with Doris he found the courage to reveal something of his own character. But, more than an autobiography, Zea Mexican is an extraordinary work of literature, much of it written in the expressive “nation language” of Jamaica and the Caribbean. Brathwaite filters his pain through his poetic gift, presenting it to the reader with all the poignancy poetry conveys.

More books like The Zea Mexican Diary: 7 September 1926-7 September 1986 may be found by selecting the categories below: