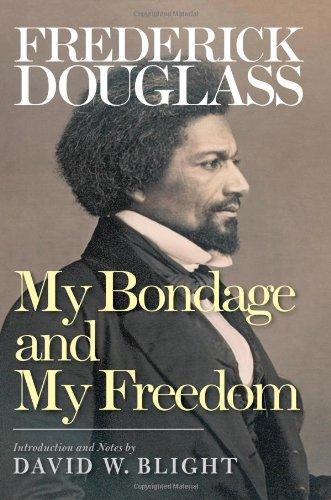 My Bondage and My Freedom
by Frederick Douglass

Book Description:
Born into slavery in 1818, Frederick Douglass escaped to freedom and became a passionate advocate for abolition and social change and the foremost spokesperson for the nation’s enslaved African American population in the years preceding the Civil War. My Bondage and My Freedom is Douglass’s masterful recounting of his remarkable life and a fiery condemnation of a political and social system that would reduce people to property and keep an entire race in chains.

This classic is revisited with a new introduction and annotations by celebrated Douglass scholar David W. Blight. Blight situates the book within the politics of the 1850s and illuminates how My Bondage represents Douglass as a mature, confident, powerful writer who crafted some of the most unforgettable metaphors of slavery and freedom—indeed of basic human universal aspirations for freedom—anywhere in the English language.

More books like My Bondage and My Freedom may be found by selecting the categories below:

Tell us what do you think about My Bondage and My Freedom.