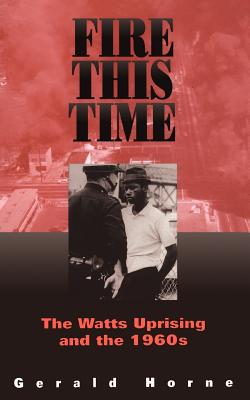 Fire This Time: The Watts Uprising And The 1960s
by Gerald Horne

Paperback Description:
In August 1965 the predominantly black neighborhood of Watts in Los Angeles erupted in flames and violence following an incident of police brutality. The official death toll was thirty-four; property losses reached hundreds of millions of dollars; but the political results were even more profound. The civil rights movement was placed on the defensive as the image of rioting blacks in the West replaced the image of meek and angelic protestors in the South. A white backlash ensued that led directly to Ronald Reagan’s election as governor of California in 1966.This is the first comprehensive treatment of the uprising, its causes, and its aftermath, and is based on hundreds of oral histories and unprecedented archival research. With a cast that includes Ronald Reagan, Tom Bradley, Martin Luther King, Jr., Edmund G. Brown, the NAACP, the Black Panthers, the Nation of Islam, and thousands of blacks and whites, Fire This Time is a compelling account of an event that changed the face of racial justice in America.

More books like Fire This Time: The Watts Uprising And The 1960s may be found by selecting the categories below: