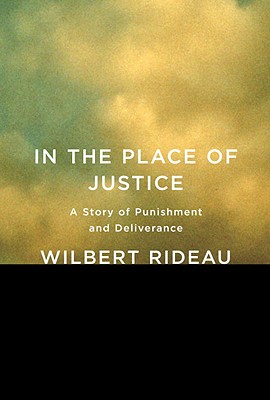 In the Place of Justice: A Story of Punishment and Deliverance
by Wilbert Rideau

Hardcover Description:
From Wilbert Rideau, the award-winning journalist who spent forty-four years in Louisiana prisons working against unimaginable odds to redeem himself, the story of a remarkable life: a crime, its punishment, and ultimate triumph.

After killing a woman in a moment of panic following a botched bank robbery, Rideau, denied a fair trial, was improperly sentenced to death at the age of nineteen. After more than a decade on death row, his sentence was amended to life imprisonment, and he joined the inmate population of the infamous Angola penitentiary. Soon Rideau became editor of the prison newsmagazine The Angolite, which under his leadership became an uncensored, daring, and crusading journal instrumental in reforming the violent prison and the corrupt Louisiana justice system.

With the same incisive feel for detail that brought Rideau great critical acclaim, here he brings to vivid life the world of the prison through the power of his pen. We see Angola’s unique culture, encompassing not only rivalries, sexual slavery, ingrained racism, and daily, soul-killing injustices but also acts of courage and decency by keeper and kept alike. As we relive Rideau’s remarkable rehabilitation—he lived a more productive life in prison than do most outside—we also witness his long struggle for justice.

In the Place of Justice goes far beyond the confines of a prison memoir, giving us a searing exposé of the failures of our legal system framed within the dramatic tale of a man who found meaning, purpose, and hope in prison. This is a deeply moving, eloquent, and inspirational story about perseverance, unexpected friendships and love, and the possibility that good can be forged under any circumstances.

More books like In the Place of Justice: A Story of Punishment and Deliverance may be found by selecting the categories below: