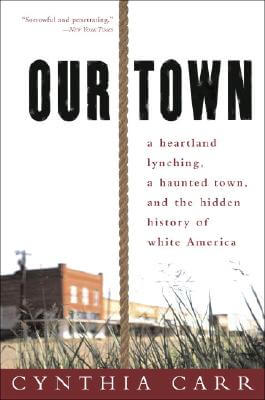 Our Town: A Heartland Lynching, a Haunted Town, and the Hidden History of White America
by Cynthia Carr

Paperback Description:
The brutal lynching of two young black men in Marion, Indiana, on August 7, 1930, cast a shadow over the town that still lingers. It is only one event in the long and complicated history of race relations in Marion, a history much ignored and considered by many to be best forgotten. But the lynching cannot be forgotten. It is too much a part of the fabric of Marion, too much ingrained even now in the minds of those who live there. In Our Town journalist Cynthia Carr explores the issues of race, loyalty, and memory in America through the lens of a specific hate crime that occurred in Marion but could have happened anywhere.

Marion is our town, America’s town, and its legacy is our legacy.

Like everyone in Marion, Carr knew the basic details of the lynching even as a child: three black men were arrested for attempted murder and rape, and two of them were hanged in the courthouse square, a fate the third miraculously escaped. Meeting James Cameron the man who’d survived led her to examine how the quiet Midwestern town she loved could harbor such dark secrets. Spurred by the realization that, like her, millions of white Americans are intimately connected to this hidden history, Carr began an investigation into the events of that night, racism in Marion, the presence of the Ku Klux Klan past and present in Indiana, and her own grandfather’s involvement. She uncovered a pattern of white guilt and indifference, of black anger and fear that are the hallmark of race relations across the country.

In a sweeping narrative that takes her from the angry energy of a white supremacist rally to the peaceful fields of Weaver once an all-black settlement neighboring Marion in search of the good and the bad in the story of race in America, Carr returns to her roots to seek out the fascinating people and places that have shaped the town. Her intensely compelling account of the Marion lynching and of her own family’s secrets offers a fresh examination of the complex legacy of whiteness in America. Part mystery, part history, part true crime saga, Our Town is a riveting read that lays bare a raw and little-chronicled facet of our national memory and provides a starting point toward reconciliation with the past.


On August 7, 1930, three black teenagers were dragged from their jail cells in Marion, Indiana, and beaten before a howling mob. Two of them were hanged; by fate the third escaped. A photo taken that night shows the bodies hanging from the tree but focuses on the faces in the crowd—some enraged, some laughing, and some subdued, perhaps already feeling the first pangs of regret.

Books similiar to Our Town: A Heartland Lynching, a Haunted Town, and the Hidden History of White America may be found in the categories below: