Dreams In A Time Of War: A Childhood Memoir by Ngũgĩ wa Thiong’o 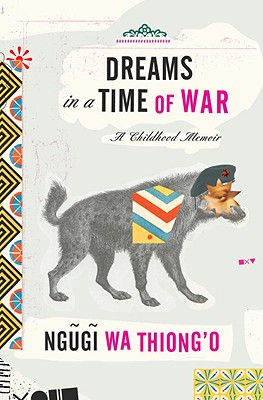 Dreams In A Time Of War: A Childhood Memoir
by Ngũgĩ wa Thiong’o

Book Description:
By the world-renowned novelist, playwright, critic, and author of Wizard of the Crow, an evocative and affecting memoir of childhood.

Ngugi wa Thiong’o was born in 1938 in rural Kenya to a father whose four wives bore him more than a score of children. The man who would become one of Africa’s leading writers was the fifth child of the third wife. Even as World War II affected the lives of Africans under British colonial rule in particularly unexpected ways, Ngugi spent his childhood as very much the apple of his mother’s eye before attending school to slake what was then considered a bizarre thirst for learning.

In Dreams in a Time of War, Ngugi deftly etches a bygone era, capturing the landscape, the people, and their culture; the social and political vicissitudes of life under colonialism and war; and the troubled relationship between an emerging Christianized middle class and the rural poor. And he shows how the Mau Mau armed struggle for Kenya’s independence against the British informed not only his own life but also the lives of those closest to him.

Dreams in a Time of War speaks to the human right to dream even in the worst of times. It abounds in delicate and powerful subtleties and complexities that are movingly told.