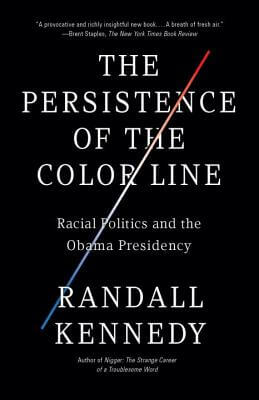 The Persistence Of The Color Line: Racial Politics And The Obama Presidency
by Randall Kennedy

Book Description:
Renowned for his insightful, common-sense critiques of racial politics, Randall Kennedy gives us a shrewd and penetrating analysis of the complex relationship between the first black president and his African-American constituency.

Kennedy tackles such hot-button issues as the nature of racial opposition to Obama; whether Obama has a singular responsibility to African Americans; the differences in Obama’s presentation of himself to blacks and to whites; the challenges posed by the dream of a post-racial society; the increasing irrelevance of a certain kind of racial politics and its consequences; the complex symbolism of Obama’s achievement and his own obfuscations and evasions regarding racial justice.

Eschewing the critical excesses of both the left and the right, Kennedy offers an incisive view of Obama’s triumphs and travails, his strengths and weaknesses, as they pertain to the troubled history of race in America.

Tell us what do you think about The Persistence Of The Color Line: Racial Politics And The Obama Presidency.