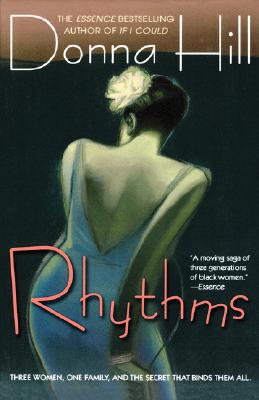 Rhythms: A Novel
by Donna Hill

Paperback Description:
It all began in 1927, in the small town of Rudell, Mississippi, after the sudden and tragic death of Cora Harvey’s parents. She has nothing left except her burning desire to become a singer. But her dream will never come true in Rudell, especially if she marries the man she adores, Dr. David Mackey. So when she sets out for Chicago, everyone in the close knit community, including David believes that the next time they see Cora, her name will be in lights. However, it’s not long before Cora finds herself back in Rudell and back in David’s arms harboring a secret she dare not reveal…A secret that will cause her daughter, Emma to flee Rudell with no intention of ever looking back. And even when Emma finds the perfect man and happiness at last, she is determined to do whatever it takes to keep her family’s shameful past at bay. Then the dream that began with Cora comes full circle with her beloved granddaughter Parris whose melodic voice fills the dimly lit nightclubs of New York City. Yet, when tragedy strikes, opening a door to the past, Parris discovers the hidden truths that have ripped the family apart—-but which may ultimately bind them together at last.From the dusty roads of the Delta to the pulsing metropolis of New York City, Rhythms is a rich, unforgettable tale about loss and healing, redemption and love.