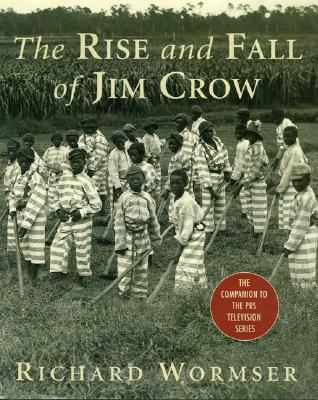 The Rise and Fall of Jim Crow
by Richard Wormser

Book Description:
Between 1880 and 1954, African Americans dedicated their energies, and sometimes their lives, to defeating segregation. During these times, characterized by some as worse than slavery, African Americans fought the status quo, acquiring education and land and building businesses, churches, and communities, despite laws designed to segregate and disenfranchise them. White supremacy prevailed, but did not destroy, the spirit of the black community.

Incorporating anecdotes, the exploits of individuals, first-person accounts, and never- before-seen images and graphics, The Rise and Fall of Jim Crow is the story of the African American struggle for freedom following the end of the Civil War. A companion volume to the four-part PBS television series, which took seven years to write, research, and edit, the book documents the work of such figures as the activist and separatist Benjamin Pap Singleton, anti-lynching crusader Ida B. Wells, and W.E.B. Du Bois and Booker T. Washington. It examines the emergence of the black middle class and intellectual elite, and the birth of the NAACP. The Rise and Fall of Jim Crow also tells the stories of ordinary heroes who accomplished extraordinary things: Charlotte Hawkins Brown, a teacher who founded the Palmer Memorial Institute, a private black high school in North Carolina; Ned Cobb, a tenant farmer in Alabama who became a union organizer; Isaiah Montgomery, who founded Mound Bayou, an all-black town in Mississippi; Charles Evers, brother of civil rights leader Medgar Evers, who fought for voter registration in Mississippi in the 1940s. And Barbara Johns, a sixteen-year-old Virginia student who organized a student strike in 1951. The strike led to a lawsuit that became one of the five cases the United States Supreme Court reviewed when it declared segregation in education illegal.

As the twenty-first century rolls forward, we are losing the remaining survivors of this pivotal era. Rich in historical commentary and eyewitness testimony by blacks and whites who lived through the period, The Rise and Fall of Jim Crow is a poignant record of a time when indignity and terror constantly faced off against courage and accomplishment.

Tell us what do you think about The Rise and Fall of Jim Crow.