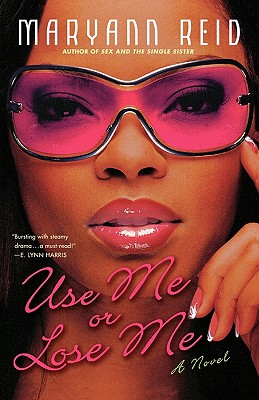 Use Me Or Lose Me
by Maryann Reid

Book Description:
The fabulously fine, Farah Washington first appeared in Sex and the Single Sister. A junior correspondent to NBC News, she has always taken the fast track to love and success. Now she’s determined to climb to the top of the media ladder, and she’s willing to use every weapon in her considerable arsenal to do so. Then Farah meets Lenox Whitworth, a powerful, oh-so-fine lawyer who steps in to negotiate the station’s contracts. But what he sees in her is the kind of sophisticated woman he needs and wants on his arm, in his life and in his bed. And Farah, sensing a prime opportunity, allows this powerful, handsome brother, to truly introduce her to the wicked indulgences of the rich and glamorous as he influences her career behind the scenes. They both believe that they’ve got a handle on a good thing, but they’re both about to realize that they’ve met their match in each other. Filled with love, sex, drama and glamour, Farah and Lenox take you on a wild ride.