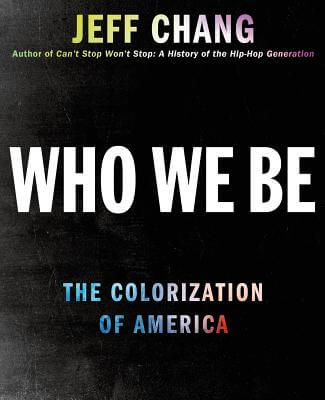 Who We Be: The Colorization of America
by Jeff Chang

Read Our Review of Who We Be: The Colorization of America

Race. A four-letter word. The greatest social divide in American life, a half-century ago and today. During that time, the U.S. has seen the most dramatic demographic and cultural shifts in its history, what can be called the colorization of America. But the same nation that elected its first Black president on a wave of hope--another four-letter word--is still plunged into endless culture wars. How do Americans see race now? How has that changed--and not changed--over the half-century? After eras framed by words like "multicultural" and "post-racial," do we see each other any more clearly? Who We Be remixes comic strips and contemporary art, campus protests and corporate marketing campaigns, Martin Luther King, Jr. and Trayvon Martin into a powerful, unusual, and timely cultural history of the idea of racial progress. In this follow-up to the award-winning classic Can't Stop Won't Stop: A History of the Hip-Hop Generation, Jeff Chang brings fresh energy, style, and sweep to the essential American story.