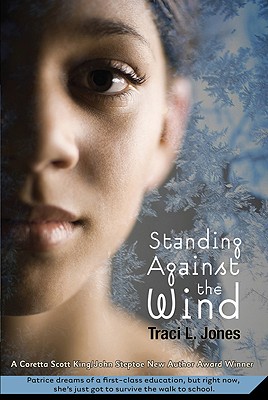 Standing Against the Wind
by Traci L. Jones

Book Description:
Patrice Williams was happy living in Georgia with her grandmother, then her mother lured her to Chicago and ended up in jail. Living in the projects, Patrice is an easy target for everyone. Not only won’t she stand up for herself, she cares about her grades—unlike her classmates. But that draws the attention of Monty Freeman, another eighth grader who asks Patrice to tutor his little brother. When Monty becomes her guardian angel, Patrice begins to think something stronger than friendship might be growing between them. Still, nothing will stop her from applying for a scholarship at prestigious Dogwood Academy—except her mother.Standing Against the Wind is a 2007 Bank Street - Best Children’s Book of the Year and the winner of the 2007 Coretta Scott King - John Steptoe New Talent Award.

Tell us what do you think about Standing Against the Wind.