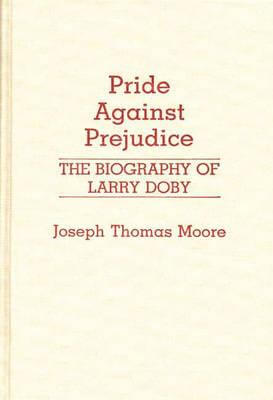 Pride Against Prejudice: The Biography of Larry Doby (Contributions in Afro-American and African Studies)
by Joseph Moore

Book Description:
Aware of Mr. Doby’s neglect by biographers, Mr. Moore, who has been a fan of his subject ever since he heard the Doby legend, seeks to give him recognition. . . . Mr. Moore effectively uses records, interviews, and a clear narrative style to make his points (what is more persuasive in sports than an athlete’s record! what is more animated than public statements and their refutations!), and gives voice to some of Mr. Doby’s severest critics . Pride Against Prejudice is a tribute to both its author and Larry Doby New York Times Book Review This is an excellent biography of Larry Doby, the first black player in the American League and one of the first black managers in the major leagues. . . . Moore has done a superb job of researching Doby’s life and writing about it. The book is highly recommended. The Sporting NewsAs the second black major league baseball player, following Jackie Robinson, Larry Doby has never received the acclaim accorded to Robinson; yet his experiences of segregation and racial invective, and his courage and ability to excel in the face of almost overwhelming circumstances, were equivalent. This fascinating biography brings to light many interesting and little-known facts concerning Doby’s life and baseball career, and his contribution as a civil rights pioneer in the American League. His story is perceived as the story of the many black men who followed him into major league baseball, and who shared importantly in pioneering the integration of the sport.

More books like Pride Against Prejudice: The Biography of Larry Doby (Contributions in Afro-American and African Studies) may be found by selecting the categories below: