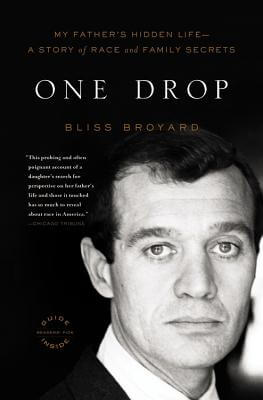 One Drop: My Father’s Hidden Life--A Story Of Race And Family Secrets
by Bliss Broyard

Paperback Description:
Ever since renowned literary critic Anatole Broyard’s own parents, New Orleans Creoles, had moved to Brooklyn and began to "pass" in order to get work, he had learned to conceal his racial identity. As he grew older and entered the ranks of the New York literary elite, he maintained the fa ade. Now his daughter Bliss tries to make sense of his choices and the impact of this revelation on her own life. She searches out the family she never knew in New York and New Orleans, and considers the profound consequences of racial identity. With unsparing candor and nuanced insight, Broyard chronicles her evolution from sheltered WASP to a woman of mixed race ancestry.

More books like One Drop: My Father’s Hidden Life--A Story Of Race And Family Secrets may be found by selecting the categories below: