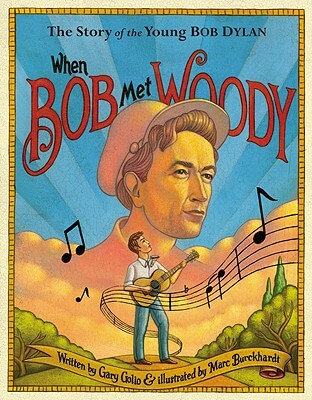 When Bob Met Woody: The Story Of The Young Bob Dylan
by Gary Golio

When Bob finished, Woody’s face lit up like the sun.

Bob Dylan is a musical icon, an American legend, and, quite simply, a poet. But before he became Bob Dylan, he was Bob Zimmerman, a kid from rural Minnesota.

This lyrical and gorgeously illustrated picture book biography follows Bob as he renames himself after his favorite poet, Dylan Thomas, and leaves his mining town to pursue his love of music in New York City. There, he meets his folk music hero and future mentor, Woody Guthrie, changing his life forever.

More books like When Bob Met Woody: The Story Of The Young Bob Dylan may be found by selecting the categories below: