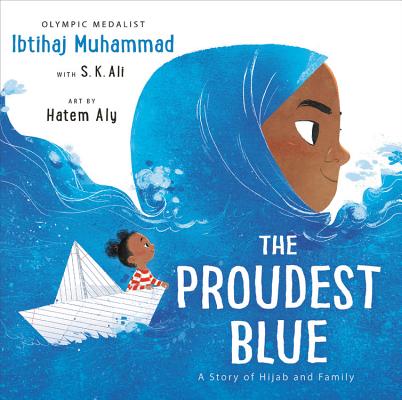 The Proudest Blue: A Story of Hijab and Family
by Ibtihaj Muhammad, Illustrated by Hatem Aly

Hardcover Description:
Ibtihaj Muhammad is a fencer and the first Muslim American woman in hijab to compete for the United States in the Olympic Games. She is also the first female Muslim American to medal at the Olympic Games, winning bronze in the women’s saber team event. An activist, speaker, and entrepreneur, Ibtihaj has written a memoir, Proud, and inspired the first hijabi Barbie in her likeness. She invites you to visit her online at ibtihajmuhammad.com. S. K. Ali is the award-winning author of Saints and Misfits and Love from A to Z and the coeditor of an upcoming Eid anthology. Like Faizah and Asiya, she and her sister visited hijab shops every year before the first day of school to choose their proudest colors. Hatem Aly is an Egyptian-born illustrator whose work has been featured on television and in multiple publications worldwide. Among other books, he illustrated Newbery Honor winning novel The Inquisitor’s Tale by Adam Gidwitz. He currently lives in New Brunswick, Canada, with his wife, son, and more pets than people.

More books like The Proudest Blue: A Story of Hijab and Family may be found by selecting the categories below: