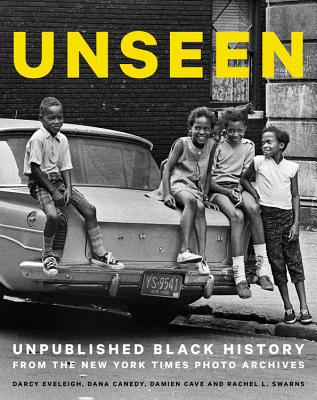 Hardcover Description:
Hundreds of stunning images from black history have long been buried in The New York Times archives. None of them were published by The Times—until now. UNSEEN uncovers these never-before published photographs and tells the stories behind them.

It all started with Times photo editor Darcy Eveleigh discovering dozens of these photographs. She and three colleagues, Dana Canedy, Damien Cave and Rachel L. Swarns, began exploring the history behind them, and subsequently chronicling them in a series entitled Unpublished Black History, that ran in print and online editions of The Times in February 2016. It garnered 1.7 million views on The Times website and thousands of comments from readers. This book includes those photographs and many more, among them: a 27-year-old Jesse Jackson leading an anti-discrimination rally of in Chicago, Rosa Parks arriving at a Montgomery Courthouse in Alabama a candid behind-the-scenes shot of Aretha Franklin backstage at the Apollo Theater, Ralph Ellison on the streets of his Manhattan neighborhood, the firebombed home of Malcolm X, Myrlie Evans and her children at the funeral of her slain husband , Medgar, a wheelchair-bound Roy Campanella at the razing of Ebbets Field.

Were the photos—or the people in them—not deemed newsworthy enough? Did the images not arrive in time for publication? Were they pushed aside by words at an institution long known as the Gray Lady? Eveleigh, Canedy, Cave, and Swarms explore all these questions and more in this one-of-a-kind book.

UNSEEN dives deep into The Times photo archives—known as the Morgue—to showcase this extraordinary collection of photographs and the stories behind them.

More books like Unseen: Unpublished Black History from the New York Times Photo Archives may be found by selecting the categories below: