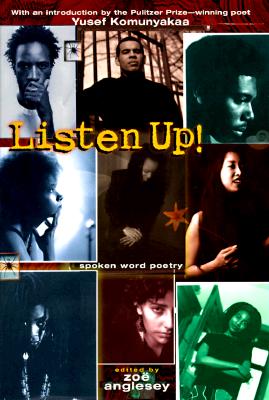 Listen Up!
by Zoe Angelsey

Spoken word poetry is a cross-cultural phenomenon. Here for the first time in one hot volume are poems from the nation’s top spoken word artists. Listen Up! features nine brilliant award-winning scribes who have ignited audiences worldwide with their soulful verse, bold alliterations, and sultry fusion of rhythm and rhyme—electrifying audiences as they chant, sing, recite, and improvise their poetry and powerful point of view.

Among these nine literary luminaries are Carl Hancock Rux, named by The New York Times as one of thirty young artists "most likely to change the culture in the next thirty years"; Jessica Care Moore, a record-breaking five-time winner of the Apollo competition; and Saul Williams, co-scriptwriter and star of the feature film Slam, winner of the Grand Jury Prize at the Sundance Film Festival and the prestigious Camera D’Or at Cannes.

Packed with penetrating interviews on the craft of writing poetry, insight into the art of performance, and on-target, off-guard photos of the poets in action at history-making poetry slams, this unforgettable collection is the next best thing to being there live.

Books similiar to Listen Up! may be found in the categories below: