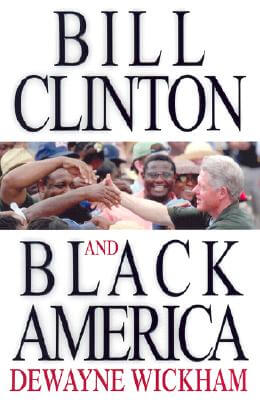 Read Our Review of Bill Clinton and Black America

Book Description:
While white Americans were evenly divided about Bill Clinton’s impeachment ninety percent of African-Americans opposed it. Now from a founding member of the National Association of Black Journalists comes a groundbreaking new book that explores the deep and unique connection between the former president and the black community in the words of journalists, celebrities, academics, and other thoughtful Americans.

Going well beyond mere TV punditry, luminaries such as Dr. Mary Frances Berry, Bill Gray, Kweisi Mfume, and Alice Randall, as well as ordinary citizens, offer insight into why African-Americans for the first time saw themselves in the soul of a president Whether it was the large African-American presence in his administration, his perceived legal persecutions, his personal style, or his lasting yet tumultuous marriage and why that kinship has sweeping cultural implications. Bill Clinton’s actions, associations, and essence are all analyzed in light of their effect on and appeal to this crucial constituency.

Much-awaited and long overdue, Bill Clinton and Black America features fascinating, provocative interpretations of the special relationship between the black people and this extraordinary man who, when his presidency ended, moved his office from 1600 Pennsylvania Avenue White America’s most famous address to Harlem’s 125th Street the heart of Black America.

More books like Bill Clinton and Black America may be found by selecting the categories below: