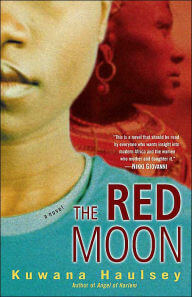 The Red Moon: A Novel
by Kuwana Haulsey

Book Description:
On the verge of adulthood, Nasarian the daughter of a successful Samburu herdsman and his Somali fourth wife finds herself trapped between the demands of her traditional tribal life and her desire to live abroad as a writer. When her parents die suddenly, Nasarian plans to escape her sheltered world, but is undermined by her scornful brother Lolorok. Appalled by Nasarian’s refusal to be circumcised and thus initiated into the traditional role of wife and mother, Lolorok allows his sister to be inherited by a distant cousin. But instead of submitting, Nasarian runs away, sparking a sweeping journey of discovery that evokes fifty years and three generations of her family history.

More books like The Red Moon: A Novel may be found by selecting the categories below:

Tell us what do you think about The Red Moon: A Novel.