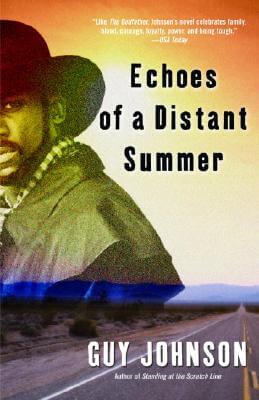 Echoes of a Distant Summer
by Guy Johnson

Read Our Review of Echoes of a Distant Summer

“You done lived a tough life, boy, and I know I’m part responsible for that. I ain’t askin’ you to excuse me or forgive me. Just know I did the best I knew to do. I was just tryin’ to make you tough enough to deal with the world. To stand tall among men, I knew you had to be strong and have yo’ own mind.”

“You were preparing me for war, Grandfather.”

Guy Johnson, the author of the critically acclaimed debut Standing at the Scratch Line, continues the Tremain family saga.

Jackson St. Clair Tremain hasn’t spoken to his grandfather King in nearly twenty years. Disgusted by the violence and bloodlust that seemed to be his grandfather’s way of life, Jackson chose to distance himself from King and live a simpler life. But now King is gravely ill, and his impending death places Jackson’s life—as well as those of his family and friends—in jeopardy. Reluctantly, Jackson travels to Mexico to see King. But after a brief reconciliation, his grandfather is assassinated, and Jackson suspects that his grandmother Serena may have had a hand in it. Jackson takes control of King’s organization, and as he does, he reflects on the summers he spent in Mexico as a child and the lessons he learned there at the knee of his strong-willed, complex grandfather.

In Echoes of a Distant Summer, Guy Johnson introduces us to a new hero, Jackson St. Clair Tremain, who learns that, like his grandfather, he must be willing to protect those he loves—at all costs.

More books like Echoes of a Distant Summer may be found by selecting the categories below: