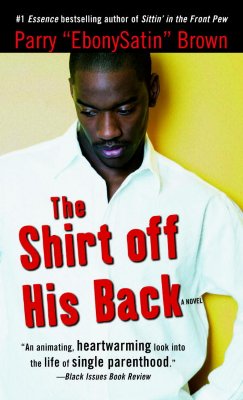 The Shirt Off His Back: A Novel (Strivers Row)
by Parry Brown

Book Description:
After a brief relationship in college, Catherine and Terry found themselves the parents of twin baby girls; Catherine, a reluctant mother from the start, abandoned the children for a successful career overseas. With the help of family and friends, Terry has raised the twins by himself, and now, eleven years later, is about to expand his family again by marrying Jackie, herself a single parent. Suddenly, realizing she needs a better family image to advance her career, Catherine shows up and demands custody of the twins.

With a nasty battle developing, Terry teams up with his best friend, Roland, a powerful attorney, to fight for custody of his children. As Catherine pits the twins against each other, Terry struggles to keep his cool.

With an engaging blend of humor and drama, and characters who seem as if they live right down the block, Parry "EbonySatin" Brown has written an entertaining novel of friendship, romance, and one man’s determination to keep his family together.


From the Trade Paperback edition.

More books like The Shirt Off His Back: A Novel (Strivers Row) may be found by selecting the categories below:

Tell us what do you think about The Shirt Off His Back: A Novel (Strivers Row).