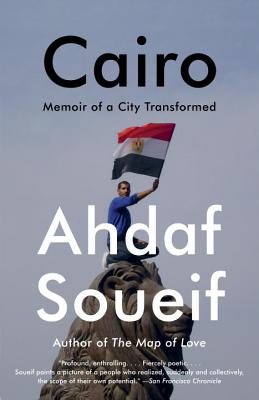 Cairo: Memoir of a City Transformed
by Ahdaf Soueif

Paperback Description:
When throngs of Egyptians gathered in Tahrir Square to demand the fall of Hosni Mubarak’s regime, Ahdaf Soueif—author, journalist, lifelong progressive—was among them. Now, in this deeply personal work, Soueif summons her storytelling talents to trace her city’s—and nation’s—ongoing transformation.
She writes of the youth who led the revolts, and of the jubilation in the streets at Mubarak’s departure. We then watch as Egyptians fight for democracy, as the interim military government throws up obstacles at every step, and as an Islamist is voted into power. Against this stormy backdrop, Soueif casts memories of her own Cairo—the open-air cinema; her family’s land, in sight of the pyramids—and affirms the beauty of this ancient city. Soueif’s postscript considers Egypt’s more recent turns in its difficult but deeply inspiring path toward its great human aims.

More books like Cairo: Memoir of a City Transformed may be found by selecting the categories below: