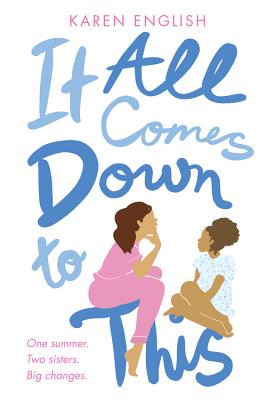 It All Comes Down to This
by Karen English

Book Description:
A powerful middle grade coming-of-age novel set in a slowly integrating upper middle class Los Angeles neighborhood in the summer of 1965, from a Coretta Scott King Honor Award-winning author. Perfect for fans of Rita Williams-Garcia and Sharon M. Draper. It’s 1965, Los Angeles. Sophie is the new black kid in a nearly all-white neighborhood; her beloved sister, Lily, is going away to college soon; and her parents’ marriage is rocky. Plus, there’s her family’s new, disapproving housekeeper to deal with. Then riots erupt in nearby Watts and a friend is unfairly arrested, and Sophie learns that life—and her own place in it—is even more complicated than she’d once thought. "Honest, witty … relatable. Unfairness and race-consciousness run through the story—so do surprises. Bigotry wears many guises. Kindness does too." —Wall Street Journal "Thoughtful and well-wrought … . Compassionate, pointed, and empowering." —Booklist, starred review "An impressive coming-of-age story." —Kirkus Reviews, starred review "Reveals how an impressionable and intelligent child learns from the injustices that touch her, her family, and her friends." —Publishers Weekly, starred review

More books like It All Comes Down to This may be found by selecting the categories below:

Tell us what do you think about It All Comes Down to This.