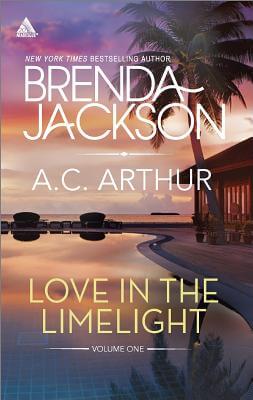 Love in the Limelight Volume One: Star of His HeartSing Your Pleasure
by Brenda Jackson and A.C. Arthur

Mass Market Paperback Description:Enjoy the first two stories of the Love in the Limelight series, where four unstoppable women embark upon a quest in Hollywood to find fame, fortune and ultimately…true loveSTAR OF HIS HEART by BRENDA JACKSONDrop-dead gorgeous Ethan Chambers is Hollywood’s most eligible bachelor. And he’s just gotten an offer he can’t refuse: a starring role on TV’s newest hit drama. But the show’s sultry makeup and wardrobe director has his pulse racing—and is making him think twice about staying single.Getting the gig on Paging the Doctor has thrust Rachel Wellesley into the unwelcome glare of the spotlight. So when Rachel starts falling for the show’s sinfully sexy star, she knows it’s time to get her own heart checked. As the cameras roll and her creative visions come to life, will Rachel finally be ready for her close-up—with the man of her dreams?SING YOUR PLEASURE by A.C. ARTHURCharlene Quinn has just landed a major contract with L.A.’s hottest record label. Even more thrilling, she’ll be laying down tracks with none other than Akil Hutton. Despite Akil’s gruff attitude, Charlene finds herself powerfully attracted to the driven music producer….His shy, innocent new client isn’t Akil’s usual type. But with her celestial voice and voluptuous body, Charlene is headed straight for Akil’s heart. But the powerhouse producer’s holding tight to secrets that may drive his new protégée away. What will it take to keep the angelic singer in his arms forever, long after the last sweet, sensual note fades away?

More books like Love in the Limelight Volume One: Star of His HeartSing Your Pleasure may be found by selecting the categories below: