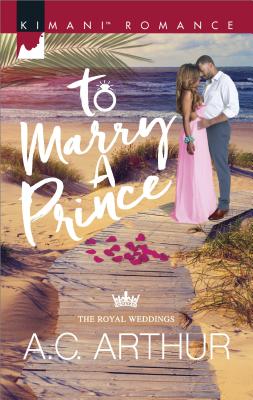 To Marry a Prince (The Royal Weddings)
by A. C. Arthur

Crown prince Kristian DeSaunters has been groomed since birth to take his place as leader of his tropical kingdom—with the proper princess by his side. Never one to lose his control, he’s stunned by his attraction to the free-spirited American stylist who arrives at the palace in his father’s fiancée’s entourage. Soon Kris and Landry Norris are sharing an instant sultry attraction that shows no signs of slowing down.

Landry couldn’t turn down the opportunity of a lifetime to dress the princess-to-be on a private Caribbean island. Falling for Kris is definitely not part of her plan, but the independent LA beauty soon finds herself yearning for a fairy-tale ending of her own. Until someone sets out to sabotage the upcoming nuptials—and Landry becomes the prime suspect. Will Kris and Landry be able to stop a hidden enemy bent on destroying the DeSaunters reign—and save the possibility of a future together?

More books like To Marry a Prince (The Royal Weddings) may be found by selecting the categories below: