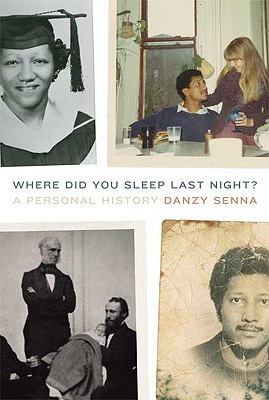 Where Did You Sleep Last Night?: A Personal History
by Danzy Senna

Book Description:
When Danzy Senna’s parents got married in 1968, they seemed poised to defy history. They were two brilliant young American writers from wildly divergent backgrounds—a white woman with a blue-blood Bostonian lineage and a black man, the son of a struggling single mother and an unknown father. They married in a year that seemed to separate the past from the present; together, these two would snub the histories that divided them and embrace a radical future. When their marriage disintegrated eight years later, it was, as one friend put it, “the ugliest divorce in Boston’s history”—a violent, traumatic war that felt all the more heartrending given the hopeful symbolism of their union.Decades later, Senna looks back not only at her parents’ divorce but beyond it, to the opposing American histories that her parents had tried so hard to overcome. On her mother’s side of the family she finds—in carefully preserved documents—the chronicle of a white America both illustrious and shameful. On her father’s she discovers, through fragments and shreds of evidence, a no less remarkable history. As she digs deeper into this unwritten half of the story, she reconstructs a longburied family mystery that illuminates her own childhood. In the process, she begins to understand her difficult father, the power and failure of her parents’ union, and, finally, the forces of history.Where Did You Sleep Last Night? is at once a potent statement of personal identity, a challenging look at the murky waters of American ancestry, and an exploration of narratives—the narratives we create and those we forget. Senna has given us an unforgettable testimony to the paradoxes—the pain and the pride—embedded in history, family, and race.

More books like Where Did You Sleep Last Night?: A Personal History may be found by selecting the categories below: