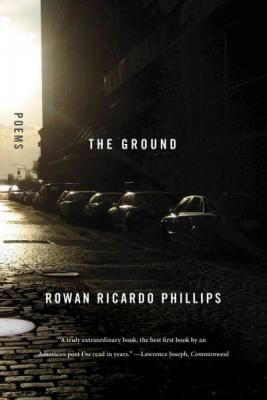 Paperback Description:
A masterful debut from a powerfully original poetic voiceA poignant and terse vision of New York City unfolds in Rowan Ricardo Phillips’s debut book of poetry. A work of rare beauty and grace, The Ground is an entire world, drawn and revealed through contemplation of the post-9/11 landscape. With musicality and precision of thought, Phillips’s poems limn the troubadour’s journey in an increasingly surreal modern world ("I plugged my poem into a manhole cover / That flamed into the first guitar"). The origin of mankind, the origin of the self, the self’s development in the sensuous world, and in both a literal and a figurative sense the end of all things sing through Phillips’s supple and idiosyncratic poems. The poet’s subtle formal sophistication?somewhere between flair and restraint?and sense of lyric possibility bring together the hard glint of the contemporary world and the eroded permanence of the archaic one through remixes, underground sessions, Spenserian stanzas, myths, and revamped translations. These are poems of fiery intelligence, inescapable music, and metaphysical splendor that concern themselves with lived life and the life of the imagination both equally vivid and true as they lay the framework for Phillips’s meditations on our connection to and estrangement from the natural world.

More books like The Ground: Poems may be found by selecting the categories below: