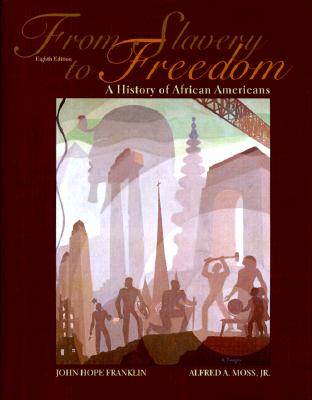 From Slavery to Freedom: A History of African Americans
by John Hope Franklin

Hardcover Description:
This is the dramatic, exciting, authoritative story of the experiences of African Americans from the time they left Africa to their continued struggle for equality at the end of the twentieth century.

Since its original publication in 1947, From Slavery to Freedom has stood as the definitive his-tory of African Americans. Coauthors John Hope Franklin and Alfred A. Moss, Jr., give us a vividly detailed account of the journey of African Americans from their origins in the civilizations of Africa, through their years of slavery in the New World, to the successful struggle for freedom and its aftermath in the West Indies, Latin America, and the United States.

This eighth edition has been revised to include expanded coverage of Africa; additional material in every chapter on the history and current situation of African Americans in the United States; new charts, maps, and black-and-white illustrations; and a third four-page color insert. The authors incorporate recent scholarship to examine slavery, the Civil War, Reconstruction, and the period between World War I and World War II (including the Harlem Renaissance).

From Slavery to Freedom describes the rise of slavery, the interaction of European and African cultures in the New World, and the emergence of a distinct culture and way of life among slaves and free blacks. The authors examine the role of blacks in the nation’s wars, the rise of an articulate, restless free black community by the end of the eighteenth century, and the growing resistance to slavery among an expanding segment of the black population.

The book deals in considerable detail with the period after slavery, including the arduous struggle for first-class citizenship that has extended into the twentieth century. Many developments in recent African American history are examined, including demographic change; educational efforts; literary and cultural changes; problems in housing, health, juvenile matters, and poverty; the expansion of the black middle class; and the persistence of discrimination in the administration of justice.

All who are interested in African Americans’ continuing quest for equality will find a wealth of information based on the recent findings of many scholars. Professors Franklin and Moss have captured the tragedies and triumphs, the hurts and joys, the failures and successes, of blacks in a lively and readable volume that remains the most authoritative and comprehensive book of its kind.

Books similiar to From Slavery to Freedom: A History of African Americans may be found in the categories below: