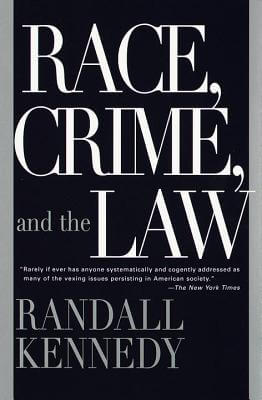 Race, Crime, And The Law
by Randall Kennedy


"An original, wise and courageous work that moves beyond sterile arguments and lifts the discussion of race and justice to a new and more hopeful level."—Arthur Schlesinger, Jr.
In this groundbreaking, powerfully reasoned, lucid work that is certain to provoke controversy, Harvard law professor Randall Kennedy takes on a highly complex issue in a way that no one has before. Kennedy uncovers the long-standing failure of the justice system to protect blacks from criminals, probing allegations that blacks are victimized on a widespread basis by racially discriminatory prosecutions and punishments, but he also engages the debate over the wisdom and legality of using racial criteria in jury selection. He analyzes the responses of the legal system to accusations that appeals to racial prejudice have rendered trials unfair, and examines the idea that, under certain circumstances, members of one race are statistically more likely to be involved in crime than members of another.


"This book should be a standard for all law students."—Boston Globe

More books like Race, Crime, And The Law may be found by selecting the categories below:

Tell us what do you think about Race, Crime, And The Law.