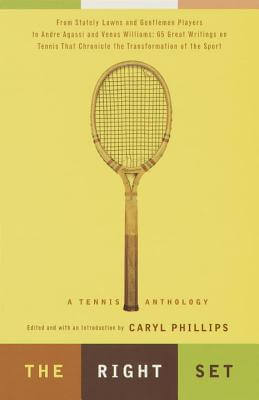 The Right Set: A Tennis Anthology
by Caryl Phillips

Book Description:
From stately lawns and gentlemen players to Andre Agassi and Venus Williams: 65 great writings on tennis that chronicle the transformation of the sport.

Since its inception, tennis has embraced traditions more patrician than plebeian. But times—and tennis—have changed. The game once reserved for royalty has moved from estate lawns to the concrete courts of the city. Old guard amateurs have given way to prodigies plastered with corporate logos. And while barriers of gender, race, and class have been shattered, the modern plagues of self-promotion, the paparazzi, and challengers of ever-escalating talent loom large.

In The Right Set, award-winning novelist and editor Caryl Phillips presents a collection of writings on the remarkable evolution of a gentleman’s pastime into a sport of jet-set players of athletic and psychological genius. Here are the stories of champions, from the Renshaw twins to "ghetto Cinderella" Venus Williams. Here, too, are volleys between tradition and innovation—debates on everything from etiquette and earnings to Andr Agassi’s rejection of the customary tennis whites. Insightful, informative, wonderfully entertaining, The Right Set is as colorful and surprising as the game itself.

More books like The Right Set: A Tennis Anthology may be found by selecting the categories below: