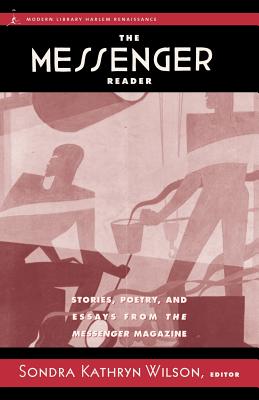 Paperback Description:
The Messenger was the third most popular magazine of the Harlem Renaissance after The Crisis andOpportunity. Unlike the other two magazines, The Messenger was not tied to a civil rights organization. Labor activist A. Philip Randolph and economist Chandler Owen started the magazine in 1917 to advance the cause of socialism to the black masses. They believed that a socialist society was the only one that would be free from racism.

The socialist ideology of The Messenger "the only magazine of scientific radicalism in the world published by Negroes," was reflected in the pieces and authors published in its pages. The Messenger Reader contains poetry, stories, and essays from Paul Robeson, Zora Neale Hurston, Wallace Thurman, and Dorothy West.

The Messenger Reader, will be a welcome addition to the critically acclaimed Modern Library Harlem Renaissance series.

More books like The Messenger Reader: Stories, Poetry, and Essays from The Messenger Magazine may be found by selecting the categories below: