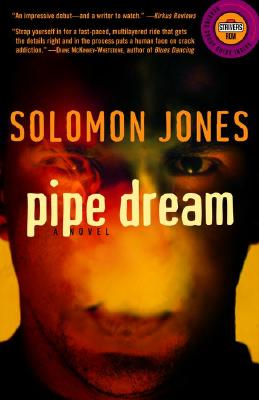 Paperback Description:
The lawyer turned on the tape recorder, handed his client a cigarette, and lit it for him. Black drew hard, squinting as the smoke rushed into his lungs.
"Where do you want to start?"the lawyer said, lighting a cigarette of his own.
"I guess there’s only one place to start; at Broad and Erie."

Johnny Podres, a politician whose record against corruption had been propelling him straight to the mayor’s office, is found murdered in a North Philly crack house.

Enter Samuel Jackson, a.k.a. Black, a drug addict who knows better, a man embittered by the fact that he can’t seem to escape from his addiction to crack cocaine or, for that matter, from himself. Though he was once a family man with a wife and son, Black’s only concern these days is getting his next high, that is, until he stumbles across a friend and fellow addict, Leroy, and both become prime suspects in the Podres murder. Black and Leroy hook up with two female pipers: Clarisse, a registered nurse who is slowly losing to crack any semblance of a respectable life, and Pookie, who already has lost it. Soon the hunt is on for all four as they try to stay one step ahead of a police department under tremendous pressure to solve the case—because if a killer isn’t found soon, this could blow up into one of the biggest scandals in Philadelphia history.

Solomon Jones weaves a suspenseful story against the backdrop of corruption in the Philadelphia police department and centers it on a group of drug addicts who, in the process of fleeing the law, come to terms with their own addiction, leading to some devastating consequences.

More books like Pipe Dream: A Novel (Strivers Row) may be found by selecting the categories below: