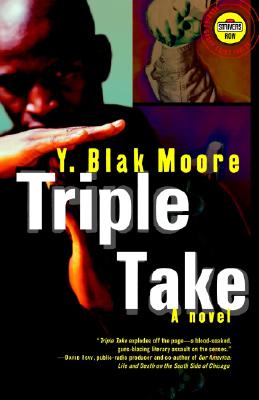 Read Our Review of Triple Take: A Novel

Paperback Description:
After serving ten years for armed robbery, Jonathan “JC” Cole is about to get out of the joint, and he has one thing on his mind: revenge against the three men—former childhood friends, now powerful crime lords—who betrayed him to save their own skins. Richard “Richkid” Kidman is a Playa with a capital P, at one time controlling a stable of twelve women. Alonzo “Zo” Johnson is one of the richest drug dealers in the Windy City. And Eugene “Lil G” Pierce ranks among the most successful con men on the East Coast.

JC feels that the time has come for him to claim what is rightfully his. His misfortune was his ex-friends’ stepping-stone, and now it is time for them to pay up—in spades. He doesn’t want to kill them, he just wants to take everything away.

He does this with the help of his woman, Champagne; his best friend, Rat; and Rat’s girlfriend, Shaunna. They form a family of sorts, with JC as the leader and Champagne as the fierce mother hen, together embarking on an exciting journey into the underworld of Chicago.

More books like Triple Take: A Novel may be found by selecting the categories below: