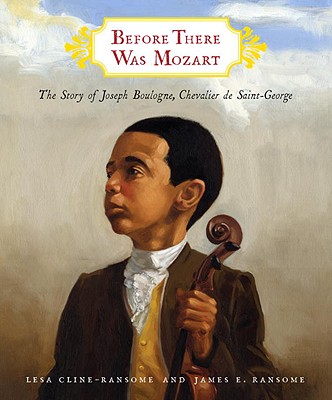 Before There Was Mozart: The Story of Joseph Boulogne, Chevalier de Saint-George
by Lesa Cline-Ransome

Book Description:The musical superstar of 18th-century France was Joseph Boulogne a black man. This inspiring story tells how Joseph, the only child of a black slave and her white master, becomes ""the most accomplished man in Europe."" After traveling from his native West Indies to study music in Paris, young Joseph is taunted about his skin color. Despite his classmates’ cruel words, he continues to devote himself to his violin, eventually becoming conductor of a whole orchestra. Joseph begins composing his own operas, which everyone acknowledges to be magnifique. But will he ever reach his dream of performing for the king and queen of France? This lushly illustrated book by Lesa Cline-Ransome and James E. Ransome introduces us to a talented musician and an overlooked figure in black history.

More books like Before There Was Mozart: The Story of Joseph Boulogne, Chevalier de Saint-George may be found by selecting the categories below: